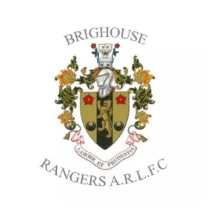 On a gloriously hot and sunny afternoon, the Buffaloes A side took the field in a determined mood. It took them only 5 minutes to open the scoring when left centre Sam Neave cut inside and went like a knife through butter past the Brighouse cover tacklers before going over the whitewash for a lovely try. The conversion went wide; Score Buffaloes 4-0.

In the 10th minute, the Buffaloes went further ahead with a fine cross-field move that saw the Buffaloes stand-off Lewis Johnson jink inside to glide past the Brighouse defence to go over for a try that he also converted; Score Buffaloes 10-0.

After some end-to-end play, coach Cam Leeming, who had a powerful performance, left the Brighouse defenders in his wake as he went in for the Buffaloes 3rd try of the afternoon; there was no conversion; Score Buffaloes 14 – 0.

Due to the heat, the referee allowed a drinks break after the first quarter, which appeared to refresh the Brighouse side, who came up with their first try in the 25th minute. Although the Buffaloes defended well for 5 tackles on their own line, they failed to cover the Brighouse hooker, who, on the last tackle, dove in to score from a metre out. The conversion was added; the score Buffaloes 14 -6.

The Buffaloes still looked the much livelier side and, despite the heat, were constantly looking to attack. In the 35th minute, Tony Morrison went in for their fourth try of the match. Unfortunately, the conversion went wide; Score Buffaloes 18 – 6.

Just before the break, Ben Blanchard went in for an opportunist try. The move started 40 metres out, and the ball found Sam Marshall, who sprinted down the right wing and looked likely to score until the Brighouse full backhauled him down just metres from the line. The ball came shooting out forward from the tackle, and winger Ben Blanchard picked it up to score. The Brighouse side claimed there had been a knock-on, but the referee’s decision was that Brighouse had stolen the ball, and the try was awarded; There was no conversion; Score 22 – 6.

The break appeared to rejuvenate Brighouse, who was the first to score in the 45th minute when their hooker once more managed to bury his way over from a metre out for his second try; Score Buffaloes 22 – 10.

Coach Cam Leeming came back on the field on the field, and within a minute, he went in for his second try of the afternoon in the 50th min; Tony Morrison converted; Score Buffaloes 28 – 10.

Credit to the Brighouse side, who regrouped and took the initiative away from the Buffaloes. Who looked at times to be trying a little too hard to score. The comeback was on. Within 6 minutes, Brighouse scored 3 tries in the 66th, 68th and 72nd minutes, two of which were converted, bringing the score to Buffaloes 28 – 26.

In the 75 min, coach Cam Leeming came back on for one final effort (perhaps sensing the danger), and the effect was immediate. As the Brighouse prop ran the ball out, Cam completed an audacious ball steal in the tackle and ran 20 metres to score his hat-trick try; Score Buffaloes 32 – 26.

If the Buffaloes were hoping this try would finally extinguish the Brighouse fight back, this wasn’t to be. Brighouse kicked off, and the ball went over the waiting Buffaloes defender and bounced towards the try line. Brighouse reacted the quicker of the two sides to regain possession and score close to the posts. Score Buffaloes 32 -30.

The Buffaloes knew they had just to see out a final couple of mins, but the kick-off went into touch from a Buffaloes hand, and Brighouse regained possession. Not for the first time, the referee, who was often distant from play, missed a suspiciously forward pass, which led to a further Brighouse try; Score Buffaloes 32 -36.

The Buffaloes, who had led throughout the game, were behind for the first time with just injury time left, and they tried to mount a last-gasp attack, but a knock-on in the tackle left Brighouse to claim what throughout the match looked an improbable victory. Credit, though, goes to all 34 players for their non-stop performance on a scorching afternoon. Buffaloes coach Cam Leaming was the stand-out player for the home side.