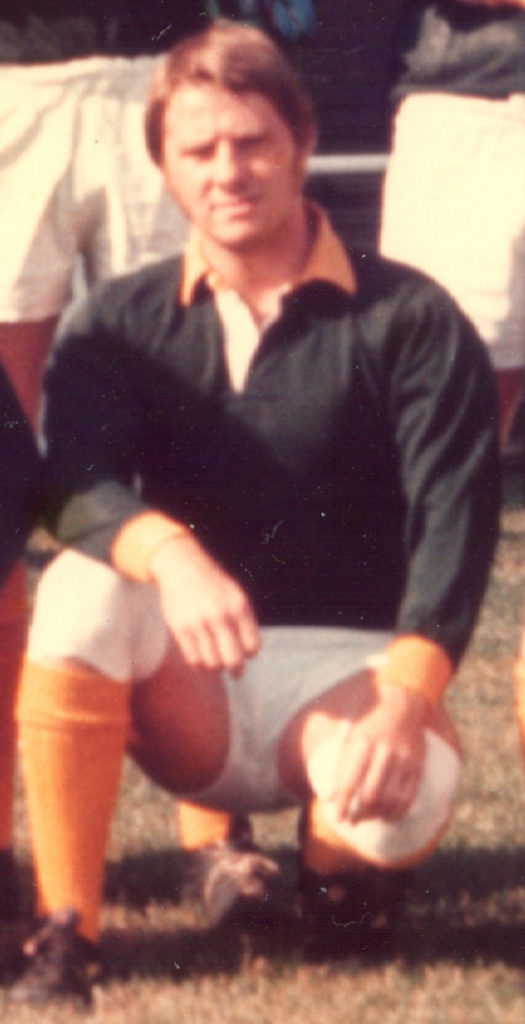 Barry joined Bramley as part of the club record transfer deal, which took Graham Idle to Wakefield Trinity in 1975. The highly-rated half-back made his Bramley debut in the 12-28 Yorkshire Cup first-round defeat at Odsal on 31st August 1975. Barry scored his first try in the amber and black jersey in the impressive 27-9 demolition of neighbours New Hunslet at McClaren Field. He would score two more tries in his first season with the club in the home defeats against Rochdale Hornets (10-19) and Workington (5-14) and ended the season having made 29 appearances, including one as a substitute.

September of 1976 saw Barry score tries in successive matches against Whitehaven at home (26-15) and at Dewsbury’s Crown Flatt ground, where Bramley lost 5-24. The arrival of new coach Peter Fox signalled a remarkable change in Bramley’s form. The team put together a club record 14 consecutive league victories in a season, which saw Bramley winning promotion to the first division.
Adding to his two tries in September, Barry crossed the whitewash a further five times during the season with tries in successive matches in November in the 23-17 victory at Batley and the 26-18 home win versus Huyton and tries in the home wins against Dewsbury (15-13), Doncaster (33-24) and Batley (42-10). 1976-77 would go down as a fine season for the player and the club.

After the high of the season, Bramley was shocked by the shock of coach Peter Fox moving to Bradford Northern and taking an intrinsical part of the successful promotion-winning side with him. Bramley’s loss of key personnel made relegation a certainty, and this was a season to forget and resulted in Barry making 16 appearances, including 4 as a substitute. The 1978/79 season saw Barry score his first try for one day short of two years when he touched down in the 10-14 reverse at home to Dewsbury.

Season 79/80 was a better season for the club and Barry, as he enjoyed the try-scoring feeling five times. When scoring in the cup defeats at home to Halifax (5-12) in the Yorkshire Cup, away at Salford (9-23) in the John Player Trophy and in the ill-tempered heartbreaking last kick of match 16-17 defeat at York in the Rugby League Cup-tie. His two tries in the league came against Keighley in a 16-5 home victory and the 19-27 defeat at Swinton. In all, including substitute appearances, Barry appeared in the first team on 22 occasions, including his 100th club appearance in the 9-3 away win at Doncaster in November.

1980-81 was to be Barry’s last for the club, with his final appearance being in the comfortable 25-2 victory against Doncaster on 22nd February 1981, having scored his final try in the 17-21 defeat to Rochdale Hornets at the Athletic Grounds in September. The first 9-8 victory at Whitehaven on 12th October was Barry’s 100th start in the black and amber colours.

Barry Langton will always be remembered by the Bramley faithful as a 100% hard-working and fantastic clubman for both the first and second teams. He remained a popular figure around Bramley as the manager of the Bramley RLFC McClaren Bars and the Black Lion public house on Broad Lane, Bramley and is still a popular visitor to the Bramley Ex-Players events and Bramley Buffaloes matches.