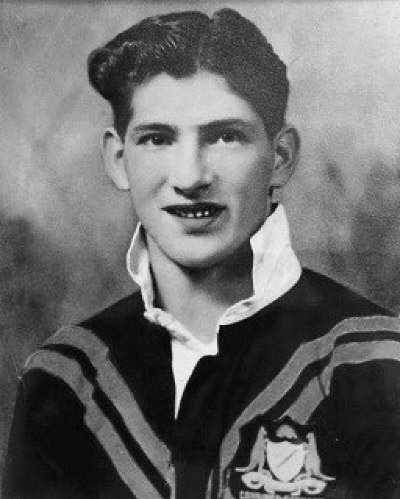 Bob Bartlett was spotted by Bramley Chairman Walter Popplewell as he managed the 1946 Great Britain Rugby League tourists in Australia.  It is rumoured that Bob thought he was signing for Leeds and not for Bramley in Leeds! However his 100% commitment and skills soon made him a big hit with the Bramley supporters.

He made his debut on August 23rd 1947 in a 29-8 home victory against Belle Vue Rangers, the following month saw him score his first try in the amber and black in a 3-43 defeat at Huddersfield in the Yorkshire Cup competition.  Tries followed at York in a 19-12 win in November, at Swinton in January during a 10-19 defeat and finally crossing the line for the visitors in the RL Challenge cup tie against Vine Tavern.

The first game of the 1948-49 season saw Bob score the only Bramley try in a memorable 7-7 draw at Headingley.  The second match of the season resulted in Bob finally scoring on his home ground during a 27-5 victory against Hunslet, December brought tries at home to Huddersfield in a close 15-21 defeat and on Christmas Day at Odsal as Bradford Norhern celebrated Christmas with a 12-9 victory. His final match for Bramley was at Huddersfield on the 22nd January as he said farewell with a well taken try in a 5-28 defeat.

Bob Bartlett was then transferred with Dennis Murphy from Bramley to Leeds in exchange for Joseph “Joe” Hulme and Dennis Warrior, and made his debut for Leeds against York at Clarence Street, York on Saturday 29 January 1949.

Bob also played in Leeds‘ victory in the Yorkshire County League during the 1950–51 season. His Leeds career consisted of scoring 33 tries in 83 apperances.

After returning back to Australia Bob appeared for the NSW Country Firsts in the 28-27 victory over New South Wales Town Firsts at Sydney Cricket Ground on Saturday 16 May 1953.

His sporting achievements were rewarded with an Australian Sports Medal in 2000.