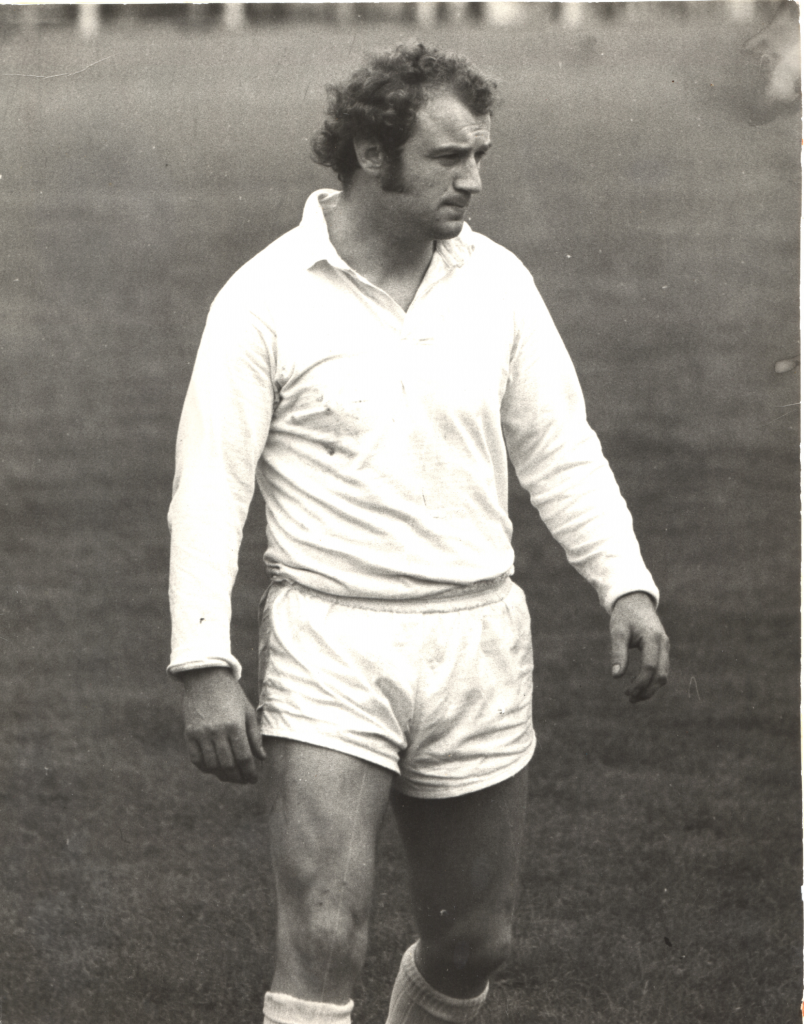 Having played at Wakefield and Castleford (where he scored the only try in Castleford’s 7-2 victory in the 1966 BBC2 Floodlit Trophy Final against Swinton) Jack Austin signed for Bramley for the 1969/70 season and made a try-scoring debut in a tremendous 16-15 home victory against Hull, the next game also at home he scored again although this time for the losing side as Bramley went down 13-22. It is interesting that Jack made all his apperances that season on the right wing and not his favoured left wing.  Further tries came in victories at Doncaster (16-0) and Blackpool (15-4) and the home games against York (16-12) and Blackpool (14-0) to finish his first season at McClaren Field with 6 tries in 24 apperances.

With Peter Goodchild now owning the number two jersey, Jack found himself back in his favoured position on the left wing and celebrated with 2 ties in the first three matches of the 1970/71 season in home victories against Halifax (17-5) and Bradford in the Yorkshire Cup (27-5) although during September and October he played 3 matches as left centre to Malcolm Craker.  A 27-24 home victory against Batley saw Jack cross for his first brace of tries, this was followed by another five in total during the remaining part of the season.  His nine tries putting him behind Peter Goodchild with 15 and Johnny Wolford with ten.

By now Jack had become a cult hero at Bramley with his no-nonsense style of play, Jack’s view was why waste energy side-stepping or swerving around an opponent when you could run through and over them! The 1971-72 season saw Jack score in the first match of the season at home to Halifax in an 18-12 Yorkshire cup victory and in the final game of the season an 8-17 defeat at home to Widnes.  The rest of the season brought another eight tries including a try in the tough 8-2 away victory against Whitehaven and two tries in the home victories versus Whitehaven (24-5) and Rochdale Hornets (18-5), this season Jack was second in the Bramley try-scoring list behind 14 try Peter Goodchild.

Bramley were now about to start a golden era in the club’s long history and the 1972/73 season started win Bramley winning their first four matches with Jack crossing for 4 tries, one against Leigh (15-13) and at Hunslet (20-7) and two in a 13-10 home victory against Batley.  Bramley’s first defeat was at Castleford (0-18) where future Castleford legend John Joyner made his debut against Jack and said at the end of his career it was certainly a baptism of fire and Jack was the hardest and toughest player he ever faced! Jack finished with a personal best of 14 tries in the season including braces in a 34-6 home win against Doncaster and in an impressive 20-13 McClaren Field victory against Bradford Northern, although he had to be content with helping Bramley reach the new First Division for the 1973/74 season after finishing behind new Bramley tries in a season record holder Alan Smith with 20 tries beating the previous record of 19.

The 1973/74 season to be Jack’s and Bramley’s finest season before he tragically broke his leg in the 17-13 Good Friday victory at Headingley which all but secured Bramley’s survival against relegation in the first division. His try tally at the time was 18 and looked as though he could equal or beat Alan Smith’s record.  His first try of the season came in a superb 30-17 victory at the Watersheddings as Oldham put to the sword.  A week later and two tries were scored as Hull were defeated 20-12 in the John Player trophy.  The quarter-final of the BBC 2 Floodlit trophy competition saw Bramley trail 0-2 at half-time, before the live television coverage started (they only used to show the second half of the featured matches) and Bramley celebrated national coverage by scoring 13 unanswered points with Jack crossing for one of the tries. The next game saw Bramley play Castleford in the league at Wheldon Road and Jack came away with a brace of tries in a 14-10 victory.  The BBC 2 Floodlit final against the star-studded Widnes side was to be the club’s finest 80 minutes with Jack scoring the first try in an amazing 15-7 victory which shook the sporting world, the following match and a lap of honour before the match versus Whitehaven was celebrated by a brace of tries for Jack.  A try in a pulsating 11-8 victory at Keighley in the quarter-final of the John Player Trophy took Bramley in to the semi-final and defeat at Rochdale Hornets. A purple patch in January and February resulted in 5 tries in 4 games as he scored two in an 8-5 RL Challenge cup victory at Whitehaven, another two in the 13-31 reverse at Featherstone, however the first of the five in a nail-biting 15-16 home loss against Featherstone is considered to be the finest of his Bramley career as he went the length of the field knocking would-be tacklers away like flies as he stormed down the touchline in front of the main stand to score what the newspapers classed as the try of the season.  A try in a 5-35 drubbing at home to Wakefield Trinity and what turned out to be his final two tries of the season for him came in an emphatic and memorable 41-20 home victory against Leigh.

After complications and a further fracture Jack finally returned with a try-scoring appearance in a 32-6 away victory at Halifax in the BBC 2 Trophy in September 1975 a full 17 months from the match at Headingley.   He proved he was back to his barn-storming best when scoring ten tries in twelve apperances including scoring in three consecutive game twice in that period, highlights being a brace against Doncaster at McClaren Field and tries in the 14-all draw at York and 19-13 at Batley.  H again had topped the try-scoring list this time with 11 in 22 apperances, five tries ahead of Billy Rowett and Derek Parker.

The 1976/77 season saw Jack score in the first match of the season against Wakefield Trinity in the first round of the Yorkshire Cup in a 7-15 home defeat.  With the arrival of Peter Fox Bramley’s season took an amazing upturn in fortunes and performances with Bramley winning 14 consecutive league games.  Jack was in full flow and during this run scored his one and only hat-trick for the club when he crossed 3 times in a 33-24 home victory against Doncaster, he also scored a brace against a shell-shocked high-flying Dewsbury team as Bramley turned on the style in the John Player Trophy.  He scored in three successive matches by scoring tries in a 15-13 home victory against Dewsbury and in the 21-2 win at Blackpool Borough before scoring his hat-trick.  Other notable victories in which Jack scored included in the away wins at York (15-5) and Swinton (18-12), again he finished as the clubs leading try-scorer for the season with 15 and being ahead of Derek Parker with 13 and John Hay and Peter Goodchild both on 11. Bramley clinched promotion to the first division after an incredible season and interestingly that out of the 27 matches Jack played that season only five were on the left wing with 15 being played at right centre and seven at left centre.

As Peter Fox left to take over at Bradford he decided to take Jack with him and this resulted in Jack only making two apperances before leaving the black and ambers for the red, black and amber of the Northern.  Although gutted by the events, Bramley supporters still had their memories of “fiery Jack” and were happy for him that he gained league and cup honours while at Odsal.

Jack returned to his favourite stomping ground for the 1982/83 season and enjoyed a purple patch during January as he scored tries in the three victories against Huyton away (8-3) and at home versus Cardiff Blue Dragons (31-8) and (Keighley 12-10) he also scored in the 18-12 victory at Fulham, a 13-13 draw at home to Whitehaven, at home to Swinton (34-14) and followed this with two tries in a 31-2 victory at Huyton.  What turned out to be his final try in the Black and Amber of Bramley was scored in a 28-18 victory at York, ending the season with 9 tries in 13 apperances plus 4 as playing substitute, Bramley finishing fifth and just missed out on promotion to the first division. The following season saw just one full and one substitute appearance before leaving for Dewsbury, his last match being the 80 minutes playing at left centre on September 7th against Batley in a 14-17 defeat.

*Jack Austin was the leading try-scorer in the Bramley clubs long history and is still second only to Peter Lister record-breaking 140.