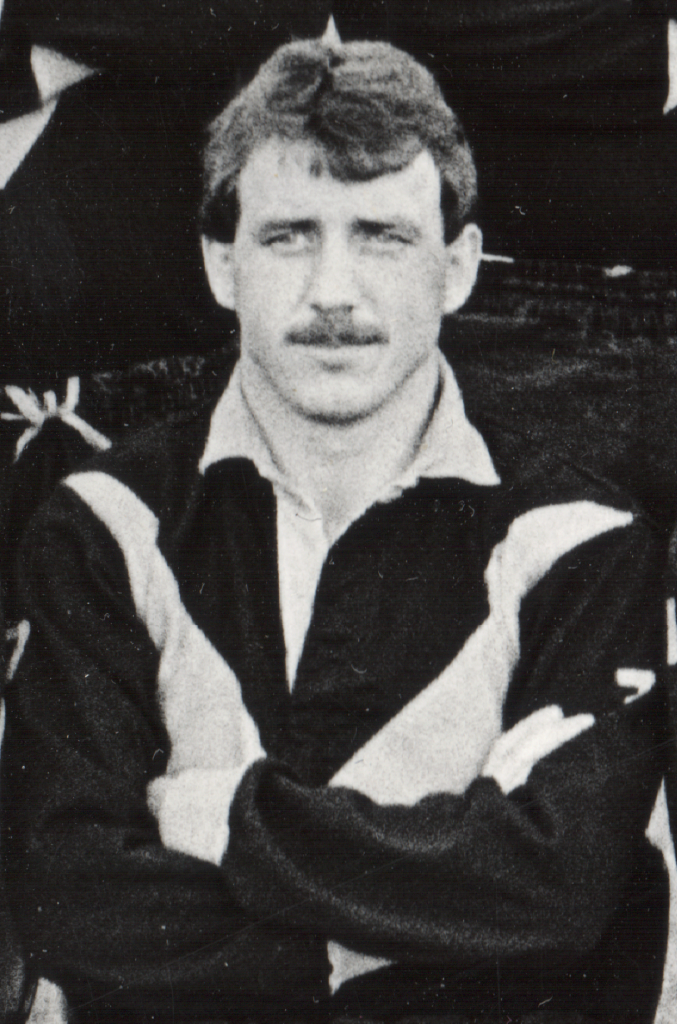 Steve made his Bramley debut on the right wing in the 12-23 Yorkshire Cup defeat in the opening game of the 1981-82 season.  His first try for the club came as Bramley lost 13-16 at Doncaster in the Easter weekend.  In all Steve’s debut season consisted of 8 starting appearances and five substitute appearances.  The 1982-83 season saw Steve appear in every match including one substitute appearance, in the total of 36 games he scored tries against York (22-13), Batley (30-5), Swinton (34-14) at McClaren Field and in the matches at Fulham (18-12) and Batley (27-5) and added 4 goals and 5 drop goals to his seasons account.

1983-84 and Steve bagged his first hat-trick of tries for the club in the 19-36 defeat at Barrow, the only other time he crossed the line that season was in the hard fought 26-21 victory at Batley, however he did pop over 10 drop goals during the season.  Five tries and another 11 drop goals were scored by Steve the following season with tries coming in successive matches at York (24-35) and at home in a 20-6 victory in the John Player Trophy match versus Southend Invicta.  In a total of 24 appearances which included two as playing substitute.

By now Steve had made the scrum-half position his own and had formed a superb (and envied by many other teams in the division) half-back pairing with Peter Lister.  The opening game of the 1985-86 season was Steve’s 100th starting appearance as Bramley defeated Batley 14-13 at home.  Six tries came his way that season including a brace in the 46-20 home victory against Mansfield Marksmen.  The following season and again Steve crossed the line six times with tries coming at home against Huddersfield (24-19), Fulham (18-10) and Mansfield Marksmen (12-3) and at away grounds, Hull in the Yorkshire Cup (19-33), Dewsbury (18-16) and Batley (9-17) in his 26 appearances.  Steve finished 1987/88 by taking over the goal-kicking responsibilities and kicked 12 in 5 matches including four in what turned out to be the difference in a tight 20-13 win at Batley, over the season he also scored four tries and four goals.

The free-flowing style of rugby Bramley produced in the 1988-89 season provided Steve with his most productive season so far, scoring 8 tires, including two in the 30-8 home win versus Fulham.  He scored 18 points in the 62-14 destruction of Dewsbury at McClaren Field scoring a try and 7 goals and then kicked over 8 goals in the following week’s 56-10 thumping of Fulham in the John Player Trophy.  A week later saw Steve start his 200th Match for Bramley and celebrated with a try and four goals in the 32-6 against Mansfield Marksmen which completed a personal tally of 46 points in the three consecutive home matches.

Steve started the following season by scoring 4 tries in six matches in the early part of the season including touching down in three consecutive games, Rochdale (17-46) and Chorley 46-10) at home and in a rare victory at Workington (20-12).  The Chorley match saw him also kick 7 goals for a match total of 18 points. After scoring 187 points in the previous season Steve finished with 175 points for this season.

In 1990-91 Steve was again entrusted with the goal-kicking duties and duly kicked another 71 during the season including 8 in the 44-6 home victory against Runcorn and 7 again at McClaren Field, this time in the 27-18 win against Chorley Borough.  Steve also scored tries at Nottingham Outlaws (21-24) and the home matches against Doncaster (12-14) and Nottingham (29-6), his tally included 5 drop goals during a disappointing season for the Bramley faithful.

The promotion winning season of 1991-92 was spearheaded by an incredible season personally for Steve who broke Bramley record after record as he played and scored in every match.  Finishing with 138 goals and 288 points he created two new seasonal records, plus he became the first Bramley player to score 50 drop-goals in a career, his 50th being in the 15-38 Yorkshire Cup defeat at home to Bradford Northern.  He kicked seven place goals in a match on three occasions at home to Nottingham (54-0), Doncaster (38-8) and Scarborough Pirates (47-0) when he also kicked a drop-goal, he also kicked 6 goals on 7 occasions. His record-making 131st goal being the only goal in a 6-12 home defeat against Batley.  He also scored his 50th career try for the amber and blacks, this coming in the 52-0 romp at home to Chorley.  Steve also made his 300th starting appearance in the 18-18 home draw against Keighley in the play-off semi-final.

Amazingly after his record-busting season, the 1992-93 campaign would be Steve’s last at the club.  To the surprise of the Bramley fans, Steve was restricted to only nine appearances with his last outing being the 10-27 home defeat against Huddersfield in the first week of February.  Steve finished the season with 18 goals including 5 in the 18 all draw at home to Carlisle and his last goal and points being when he kicked the only goal in what was his final game.  He did however join the exclusive club of Bramley players who scored over 1000 points for the first team when he kicked the second of his five goals fittingly at McClaren Field against Carlisle.  A great player and dedicated team player Steve deserves to be alongside the legends of Bramley RLFC.