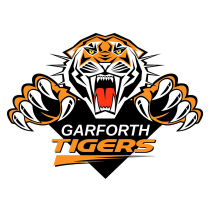 With the first team game called off due to Covid-19, the Buffaloes had just one team taking the field this weekend, all on an Odsal Esque field! Although heavy clouds filled the sky above Garforth, fortunately, very little rain fell.

The first 10 minutes were dominated by lost balls and knock-on’s resulting in possession changing frequently. Despite this, Bramley started favourably with some positive tackling but fell behind to a sturdy looking Garforth side who held a noticeable weight advantage in their pack.

As the game began to settle on the 15-minute mark, their forward made a decisive break, but this was quickly halted by Camron McGill. Despite no complaints being made by the players or supporters, the referee awarded a penalty Garforth’s way, handing them the ball in our half. This led to a try near the posts giving Garforth the first points on the board. The Garforth scrum half’s kick was so far off the mark it ended up further away from the posts than it started, giving everyone a good laugh; even the referee couldn’t resist a chuckle. Bramley 0:4 Garforth

As play continued, Andy Boot questioned a decision made by the referee, and it was deemed he spoke out of turn. Instead of presenting him with an answer, Andy was awarded a yellow card and dismissed to the sin bin. With Bramley a man down, the Garforth side took full advantage. In the 20th minute, they picked up their second try of the day as their number 13 dove over the Bramley line. The try was successfully converted. Bramley 0:10 Garforth.

Andy Boot returned to dominate the field though it was unfortunately short-lived. As the Garforth prop went to play the ball, he shoved Andy away, and a slight scuffle occurred between the two men. This time Andy was awarded a red card, though their prop did say a short while after he thought the ruling was unjust. Garforth made the Buffaloes pay for being a player short once more and went in for a further converted try in the 25th minute. Buffaloes 0:16 Garforth.

Although Garforth held a weight advantage, their energy soon dwindled whilst the youthful Bramley side was eager to respond and add their points to the board. Gary Butterfield, our man of the match, and Charlie Birkett subjected the Garforth players to powerful tackles whilst Jonah Stansfield ran the ball in with sheer determination.

This lead to the Buffaloes scoring two tries in quick succession. The first came from our lively scrum-half, Kieron McFarlane. Who went on a run from 10 metres out to score at the side of the posts. This was converted by Jenkins, making it Buffaloes 6:16 Garforth.

The second try was scored by Jenkins himself when he forced his way over from close range to score. Unfortunately, his conversion kick hit the post making it Buffaloes 10:16 Garforth.

Despite the Buffaloes roaming the field, Garforth managed to finish the half with a further converted try making the halftime score Buffaloes 10:22 Garforth.

The second half was dominated by Garforth, who made the extra man tell, scoring 4 unanswered tries in the 45th, 55th, 60th and 65th minute. Two of these were converted, bringing the score to Buffaloes 10:46 Garforth.

Bramley, however, didn’t give in and scored two quick back-to-back tries of their own. The first came in the 70th minute and was scored by Harry Sedgwick, who was on the end of a fine cross-field move. The second was on the 72nd minute with a lovely dart to the line by Jack Boot, who scored the Buffaloes’ final try of the afternoon.

Neither try was converted, leaving the score at Buffaloes 18:46 Garforth.

Garforth finally put the game to bed against an exhausted Buffaloes side with further tries in the 75th minute and the 78th minute with one further conversion to make the final score Buffaloes 18:56 Garforth.