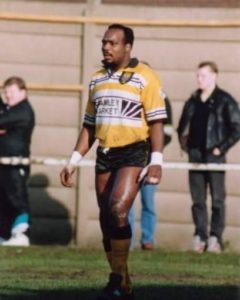 It is with great sadness that we have to announce that former Bramley player Norman Francis has sadly passed away. Our sincere condolences go to his family and friends.

Norman Francis signed for Bramley in October 1991 from Oldham and donned the amber and black for the first time when he came on as a substitute for right centre Kevin Bell in the 52-0 home victory against Chorley. The following match and Norman started the match on the left wing and celebrated with his first try for the club in an 19-10 win at Doncaster. He kept the shirt for the rest of rhe season and crossed the try-line on fifteen occasions including a brace of tries in both victories against Highfield. In a spell of nine matches during December and January he crossed the whitewash in six of those games.

After winning promotion in the 1991-92 season Bramley found it much harder in the higher division during the fo;;owing season. In a injury-ravaged season for Norman, he still scored a respectable six tries in his twelve appearances including two tries in the 22-16 home victory against Swinton and another two at McClaren field in a 14-30 loss to Rochdale Hornets.

The 1993-94 season and Norman wore the Bramley shirt for a total on seventeen occasions, 10 on the right wing, 6 on the left wing and one as substitute. Seven tries were scored by crowd favourite “Stormin Norman” including a try in each of the last two matches of the season, sadly both ended in home defeats against Huddersfield (20-30) and Workington (8-52).

One week after his 30th birthday, Norman celebrated in style by scoring two tries in a 46-0 romp at home to Highfield, another romp, this time a 34-0 home win against Carlisle. In one of Bramley’s best performances of the season, Norman scored in the impressive 27-12 home win versus Ryedale-York and scored his fifth and final try of the season at Batley visited and took away the spoils in a 18-10 win.

With just one apperance in the 1996 season, the 1995-96 campaign would be Norman’s swansong as he went over for five tries from twelve starts and one substitute appearance. His only Bramley hat-trick came when he powered his way over for three tries at Highfield as Bramley won 18-13. his other tries came in Bramley’s club record victory as Chorley were taken to the cleaners by 74-0 and his final try came in the hard-fought 20-17 victory at home to Woolston Rovers in the Regal Trophy, in fact his five tries came in three consecutive matches.

Stormin Norman’s five seasons at the club gave the Bramley fans many great memories especially, on the occasions when he would bounce off a would-be tackler, do a forward roll and get to his feet and run over another unfortunate (to be in the way) tackler! RIP Norman