The first season in the Northern Football Union - Bramley Buffaloes 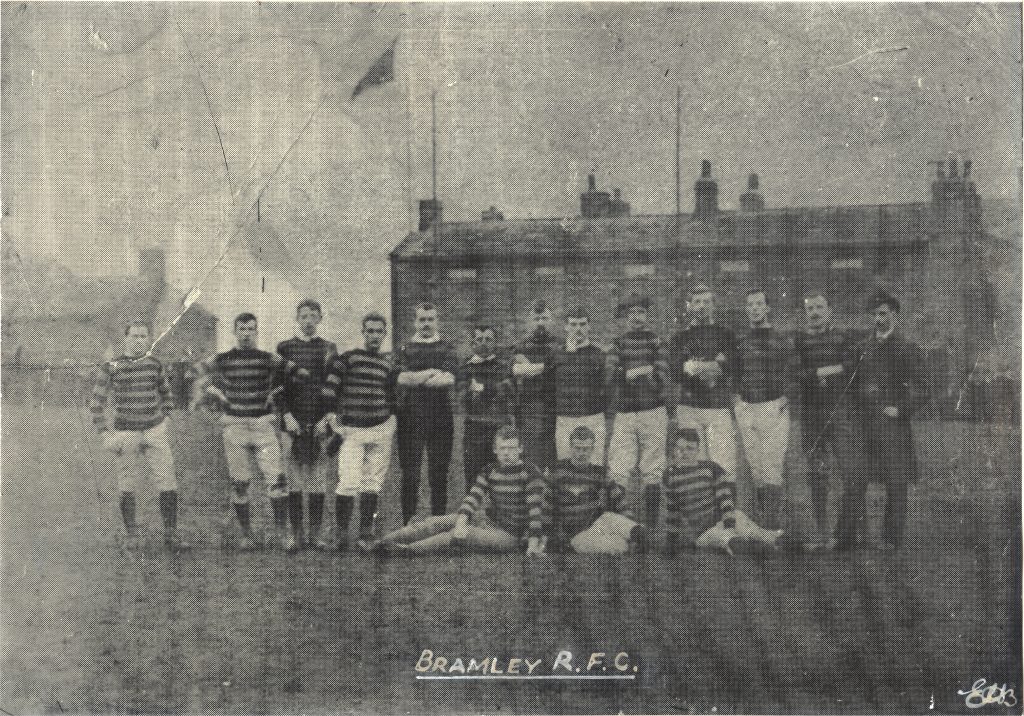 Having decided not to join the breakaway league for its inaugural season, Bramley decided to join the new organisation a year later as the following report explains.

The Bramley club held it 17th annual meeting on Friday, Mr C. Akeroyd presiding.  There was a large attendance.  The balance sheet showed that the total receipts for the past year amounted to £269 19s 1d, and the expenditure £267 16s 1d.  The club had played 30 matches, of which 17 had been won, 10 lost and 3 drawn.  They had scored 177 points to their opponents 124 points.  Bothe the report and balance sheet were unanimously adopted.

Mr Johnson Varley moved “That the Bramley Football Club resign its membership with the English and Rugby Football Unions from this date, and join the Northern Football Union, and that all liabilities and assets belonging to the late Bramley F.C. be taken over by the newly-formed Northern Union Club.”  The Committee, he said, were unanimous in their decision.

Mr Bolton seconded and the resolution was carried with only one dissentient.

Not all players were delighted with the news,

Hambrecht, the County three-quarter, has resigned his membership of the Bramley Club owing to its having joined the Northern Union. This, is the reason given to the County Secretary.Harry Myers has also left the club to join Keighley, stating that he didn’t want to play for Bramley as a “Broken timer” and wanted to play under the “amateur” banner.

Preparations for the new season was disrupted during a practice match a week before the season officially kicked off.

ACCIDENT TO A BRAMLEY FOOTBALL PLAYER. Albert Jones the well-known three-quarter  of the Bramley club was severely injured on Saturday afternoon while playing in a practice match at Bramley. Jones was taken to the Leeds Infirmary, where he was found to be suffering from concussion of the brain. The unfortunate player formerly played with the Heckmondwike team, and previous to that filled the full back position for the Liversedge Club.

Bramley’s first match in the exciting new league ended scoreless as they travelled to Heckmondwike to start the next chapter in the club’s history.  The Bramley team for that momentous occasion was;  Saynor, Hambrecht, Locke, Jones, Huggins, J.Bradshaw, Taylor, Cooper, Fowler, Fovargue, Cousins, Newton, Bretherick, H.Bradshaw and Watkin.

The following week Bramley celebrated their first home match in the Northern Football Union with an impressive 10-5 victory against Batley with Huggins crossing for the line to become the first Bramley try-scorer in the new competition, the Bramley fans favourite Harry Bradshaw crossed for the winning try with Huggins adding two goals to his try.  Two defeats followed, firstly at home to Liversedge with the returning A.Hambrecht scoring the only try in a 3-9 reverse and then a 0-13 reverse at Wakefield Trinity.  The next game saw Bramley take on Leeds for the first time under the new competition and in a hard fought battle at the Barley Mow ground, honours were shared as both teams tackled each other to submission for a scoreless draw.  A six-three defeat at Bradford Northern was followed with an impressive 4-3 home victory against Halifax.

Three defeats then followed firstly at home to Manningham (0-14) and then away defeats at Leeds Parish Church (0-11) and Hunslet (0-9).  A solitary try in the match at home to Huddersfield by Horn gave the amber and blacks a three nil win and a timely boost.  A week later and Bramley travelled the short distance to Holbeck where they suffered a 0-3 reverse.  Bramley then got back to winning ways with a tense 4-3 home success against Castleford with A.Hambrecht scoring an impressive try.

Bramley centre A.Hambrecht scored a try for The Rest against the Champions Brighouse in an 8-5 victory for The Rest, then in a Yorkshire County Trial Match while playing on the wing he scored two tries in a 22-3 victory for the Possibles against the Probables, Bramley stand-off J.Bradshaw also played for the Possibles in the match.  Again on the wing and A.Hambrecht scored a try for Yorkshire in a 17-10 victory against Cheshire played before a crowd of 5,000 (Receipts of £170) at the Boulevard. He also played for Yorkshire in a 3-7 defeat at Oldham against Lancashire in front of a crowd of 15,000 paying receipts of £542.

Bramley followed that victory with another home victory this time four to nil against Hull, however defeat followed as they went down 0-5 to an impressive Brighouse Rangers side. The run up to the following week’s 9-4 home victory against Heckmondwike was over-shadowed somewhat by the following court cases.

BOB WALTON SUED FOR A SUIT OF CLOTHES.  AMUSING ACTION IN THE COUNTY COURT.

At the Leeds County Court yesterday after- noon, Joseph Henry Tiffany, tailor, Bramley, sued Robert Walton for £2 12s for a suit of clothes. The defendant, who is a member of the Bramley Football Club, of which the plaintiff had been vice-president, played in March, 1896, against the Rochdale Hornets at Rochdale, and got the two goals which won the match for Bramley. It was alleged by him that the plaintiff, who had travelled with the Bramley team, was so delighted with the success, and with his consequent winnings, that in the train on the return journey he offered to give the defendant a suit of clothes. Defendant called at plaintiff’s shop on the following Monday to  be measured, and the suit was supplied. Not until six months afterwards did he get a bill for it.  The plaintiff denied that he had given the suit, his Honour gave judgment for the defendant with costs.

And we hear of being robbed on the pitch by the referee!

At the Selby police-court yesterday, Tom Huggins, a prominent member of the Bramley football team, John McNulty and Patrick Glarvey, labourers, were fined 40s and 15s, costs, for committing a robbery from the person of John Osley, farm labourer, Thorpe, near Selby. On Monday night when near the rail way coal depot, it appeared, the prisoners followed the complainant after leaving the Grey Horse Inn, and demanded money given him whilst there. Osley refusing to hand it over, they rifled his pockets and wished him “Good night.”

Christmas brought little cheer to the Bramley followers as defeat on Boxing day at Batley (5-8) was followed two days later with a 5-13 reverse at Liversedge.  The year of 1897 started brightly as the team posted a 6-0 home victory versus Wakefield Trinity before succumbing 0-4 on their trip to Headingley to face Leeds.  The home match against Bradford had fans of the amber and black in dreamland with an highly impressive, biggest win of the season as they dispatched Bradford Northern from the Barley Mow after a 17-3 thumping with forward Watkin scoring the first brace of tries for Bramley in a Northern Union fixture.  January ended with back to back away defeats, firstly losing 0-14 at Halifax, before conceding another 14 points on their short trip to Manningham, however Bramley did register nine points through Hambrecht try and Ward and Woodson kicking goals.

A Horn try and Saynor goal were sufficient to give Bramley a 5-0 win at home to Hunslet.  Watkin then scored tries in successive matches, these coming in a 5-11 defeat at Fartown against a strong Huddersfield side and then at home as Bramley and Holbeck shared six points.

March brought the club its worst run of the season as they lost four consecutive matches, a crushing 5-18 defeat at Castleford, 0-12 at Hull and two home defeats to end the league season against Brighouse Rangers 0-3 and finally 0-5 versus Leeds Parish Church.

Bramley’s first appearance in the Northern Rugby Union Football Cup saw Bramley drawn away to Morecambe, however the west coast side gave up home advantage and secured an 8-8 draw at the Barley Mow.  The replay, again played at Bramley saw Bramley suffice through a Woodson try and Ward penalty to give Bramley a narrow 6-4 victory.  Sadly the cup run ended when they went down 0-11 at the Barley Mow against the eventual winners of the competition Batley, who went on to defeat St Helens in the final (played at Headingley in front of a crowd of 13,492 who paid receipts of £624. 17s 6d) to lift the trophy which had been made by Silversmiths Fattorini and Sons in Bradford and cost the Northern Union £60.

Overall Bramley could be satisfied with their first season under the sports new governing body despite finishing 14th out of 16th in the Yorkshire Senior Competition.  The club’s top two try-scorers for the season were Hambrecht with 5 followed by Watkin with 4.  Goal-kicking honours went to full-back Saynor with a total of five.  The only player to appear in every match was the back, Locke who played 28 times on the left wing, one on the right wing and four at right centre.