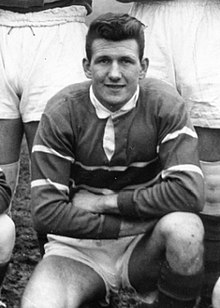 Having played in a test match for Great Britain and represented Yorkshire while at Keighley, Terry signed for Bramley from Hull in 1964 and made his debut in the 3-19 defeat at York on the 1st February.  His first try in the amber and black came at his former old ground the Boulevard when Bramley went down 8-12 in an Eastern Division match.  He was quickly become an instant hit with the Bramley faithful, especially when scoring in four consecutive matches, all of which Bramley won, firstly in the 19-2 home win against Doncaster and then in the away matches at Rochdale 18-0 (2 tries), Hull KR 10-7 (1 try) and finally two tries in the 8-6 win against Batley.  He then went two matches without scoring before scoring in the next four games including a brace of tries in the 15-16 defeat at Blackpool Borough and then a magnificent four-try haul in the 26-2 thumping of Hull KR at home in an Eastern Division match.  By the end of the season, Terry had topped the Bramley try-scoring list with 15 tries in just 17 matches.

Terry started the 1964-65 season in great style by scoring in the first four matches of the season, firstly in the 12-14 defeat at Blackpool and then in the home matches versus Halifax (21-11), Liverpool City (20-7) and finally crossing twice at Dewsbury (19-4).  The 9-25 reverse at Castleford at the end of November saw Terry take over the goal-kicking role for the side.  One of his finest performances while at Bramley came in the superb 20-5 victory in the Rugby League Challenge Cup tie at Huddersfield when Terry scored a hat-trick of tries and kicked four goals, the other try being scored by Johnny Wolford.  The final match of the season saw him score two tries in the 20-7 home victory against Batley.  His first full season in which he played in every match except the home defeat to Hull KR (7-27) and again finished as the club’s top try-scorer again with 15 tries to his name as well as kicking over 54 goals.

The following season saw Terry crossing for just four tries in his 26 appearances, although his outstanding kicking helped Bramley gain a famous 19-18 victory at home to neighbours Leeds as he slotted over five goals and also his six goals helped the team to an impressive 21-12 home win against York.  He missed the final eight games of the season due to injury and ended the season with 59 goals to his credit.

Season 1966-67 was a better season for Terry as he went over the whitewash eleven times including a brace in the 42-8 thrashing at home to Dewsbury and a try in one of the shocks of the season as Bramley went to Headingley and dumped Leeds out of the Yorkshire cup in a stunning 20-18 win.  His six goals and a try inspired a 27-6 victory at Batley and a try and five goals were the difference as Bramley won 19-7 in their final home match of the season against Keighley.  In a season in which he missed only two matches, Terry played his 100th match for Bramley on January 14th in the 2-12 defeat at Liverpool City.

The highlight of the 1967-68 season was another victory against Leeds, this time a 19-12 league victory at Headingley with Terry scoring a brace of tries and landing five goals, he also scored all the team’s points in a 10-9 home thriller against Liverpool City, his points coming from two tries (which were his final tries for the club and took his career total to 50) and two goals. He kicked six goals to help earn a 24-15 home win against Keighley and scored his 500th point for the club in a stunning 20-5 victory at Castleford where he scored a try and kicked 4 goals.

After playing in the first three matches of the 1968-69 season, Terry left the Bramley club to play amateur rugby for Keighley Shamrocks before re-joining Keighley.  His last match in the amber and black was in the 3-26 defeat at Barrow.