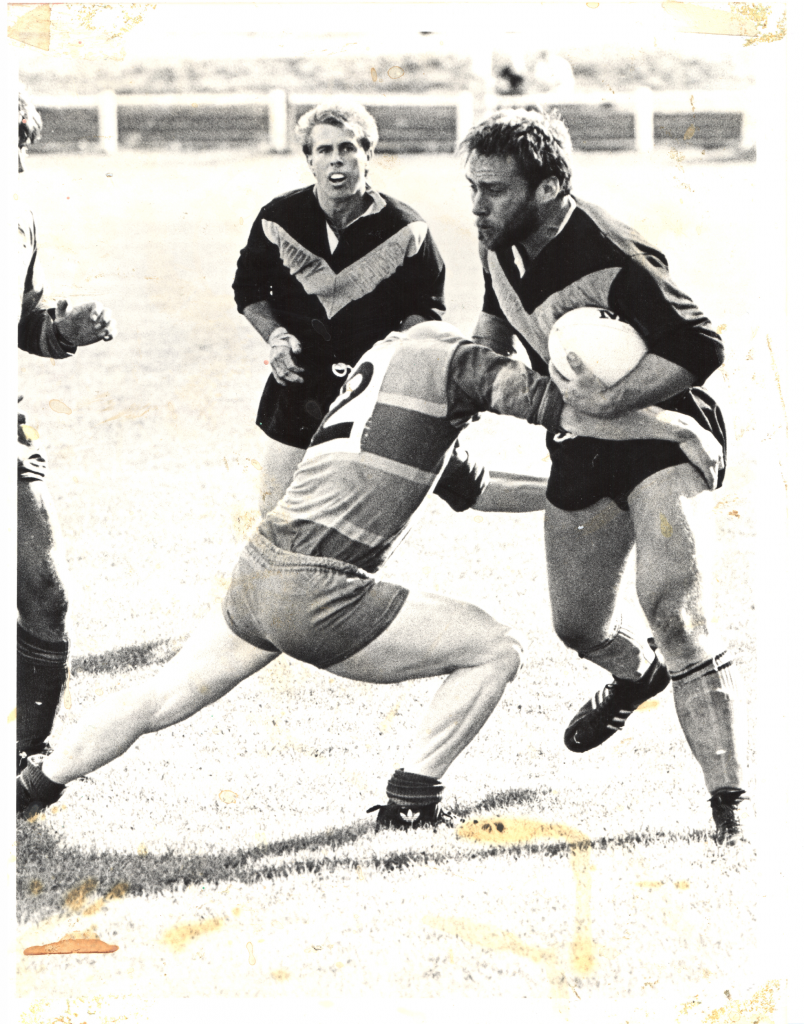 Having signed from the Otley Rugby Union club, “Big Chris” soon became a Bramley fan favourite with his block-busting runs and tries which usually had two or three would-be tacklers still trying to stop him as he crashed over the whitewash.

Chris made his debut on April 29th 1979 in a 7-13 defeat at New Hunslet although his next three matches brought four tries in an early indication with what was to follow in forthcoming seasons, his tries being scored in a 13-27 defeat at York and two during a 43-8 home drubbing of Huyton and finally in a 33-21 home defeat of Oldham. His season total being four tries in five games.

After starting the 1979/80 season with three defeats two-try Chris inspired Bramley to a 19-6 victory home victory against Batley.  October brought tries in three successive matches, against Rochdale (14-10), Halifax (11-11) and Oldham (9-22) and after not scoring in a home defeat to Barrow, Chris scored his first hat-trick in the black and amber in an 11-15 defeat at Dewsbury.  By now playing at prop or second row Chris continued to smash through defences on a regular basis and ended the season as top try-scorer with 15 tries in 28 matches including scoring in both league victories against Keighley.  The following season Chris had to share the top of the try-scoring chart with centre Steve Nicholson, both scoring 11.  Highlight on a personal front was an amazing long-range try in a 25-26 defeat at Castleford in the quarter-final of the Yorkshire cup and a brace of tries in the home victory against Huyton and scoring Bramley’s only try against first division high-flyers Warrington in the Rugby League Challenge cup.

The 1981/82 season was disappointing for Bramley fans who had very little to cheer, but would always expect something to happen when the ball was passed to Chris.  Another 11 tries placed him back at the top of the club’s try-scoring list with highlights being a brace of tries in victories at Blackpool (26-22) and in the 16-11 home victory against Cardiff Blue Dragons.

In what turned out to be a nail-biting season as Bramley just missed out on promotion, Chris had a spectacular first half of the season including a hat-trick in the 20-15 victory at Dewsbury which was part of a 14 tries in a 12 game purple patch as Chris scored in 5 and 4 consecutive matches which included braces against Blackpool (32-11) and York (22-13).  His 15 tries in 19 appearances placed him again at the top of the try-scoring list, but left Bramley supporters frustrated as it looked certain that he would create a new Bramley tries in a season record during the amazing first half of the season.  The 1983/84 season saw the club almost go out of existence with Bramley not playing any fixtures from the 12-6 home victory against Kent Invicta on October the 16th until the return fixture in Kent on December 18th, Bramley lost 11-15 but were back in action.  Chris scored three tries in 12 appearances plus 7 as substitute appearances, these being in a 32-4 away win at Keighley, a 6-28 home defeat at the hands of Huddersfield and in a 28-22 thriller at York.

The first match of the 1984/85 season saw Chris score in a 25-17 home victory against Batley, but then had to wait until March before crossing the whitewash again, this time in a 24-34 loss at Huddersfield.  A try in the return fixture with Huddersfield in a 20-11 revenge victory was followed by 2 tries in the 20-all draw at Tattersfield Doncaster.

The 1985/86 season will be remembered as the “Peter Lister” season as he broke the tries in a season when he crossed for an amazing 34 tries, however Chris had his best season in terms of appearances and tries as he scored 13 tries, including a hat-trick in the 46-20 home victory against Mansfield Marksmen in 22 appearances.  Other highlight being a try scorer in the 20-20 draw at Odsal against Bradford Northern in the Rugby League Challenge cup and being a scorer in the sensational 38-14 victory at highflying Whitehaven.

Another 5 tries in 17 appearances during the 1986/87 campaign where highlights were scoring 4 tries in four league victories, these being at home to Runcorn Highfield (20-6) and Swinton (14-13)     and away at Keighley (18-12) and Blackpool (22-18).  Despite only starting nine games plus for as a playing substitute Chris still managed to go over the line for six tires during the 1987/88 campaign, this included scoring in successive games at Mansfield Marksmen (16-8) and in the following home defeat (6-14) by Whitehaven, this would turn out to be Chris’s final Bramley try as the following season saw him make just three substitute appearances.  His last appearance in the first team Bramley shirt was when he came on to replace prop Steve Durham in the last match of the 1988/89 season, a match played at McClaren Field which saw Bramley defeat York 23-20 and was just 3 days short of the tenth anniversary of his debut.