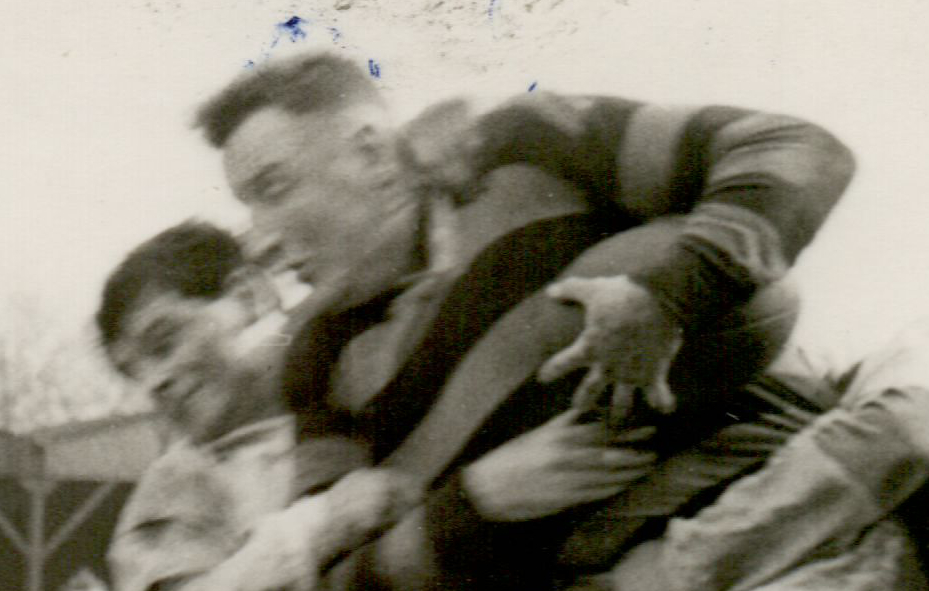 Jim pulled on the amber and black of Bramley for the first time on the 26th September 1959 in a memorable 14-10 home victory against Castleford.  He then became one of the first names on the team-sheet and ended the season with 31 appearances including a try-scoring appearance in the 39-0 Rugby League Challenge cup victory over Liverpool City at the Barley Mow ground.  His return to the side against Liverpool City (won 29-8) on 23rd April would be the start of an incredible 100 consecutive matches for the club

The 1960-61 season saw Jim alternate between both prop positions as he played in every game including memorable victories at home to Hull KR in the Yorkshire Cup (10-7) and Hull (14-11) plus a 10-5 away win at Parkside against a good Hunslet side.  Being an ever-present again in the 1961-62 season was celebrated with tries in the 14-all draw at Rochdale and the 27-16 victory at home to Hull KR.  Jim was also selected to play for the combined Leeds 13 against the touring New Zealanders at Headingley.  The team comprised of players from Bramley, Hunslet and Leeds and were defeated by 24 points to 9 in an entertaining match.  His 100th appearance for the club came in the 2-8 home defeat to Doncaster in March.

Jim’s 100th consecutive appearance for the club and still a club record was in the 8-17 home defeat against Featherstone Rovers on December 15th 1962.  He crossed over for tries against York-based amateurs Imperial Athletic in the Rugby League Challenge Cup tie at York (15-4) and then in the final match of the season a 15-43 defeat at Oldham.  Due to the severe weather of that winter, Bramley didn’t play any matches from losing 2-31 at Swinton on the 22nd December until they defeated Warrington at home 9-5 on March 9th with the season finally finishing on June 1st!

The 1963-64 season was to be one of Bramley’s most successful in its long history and included reaching the semi-final of the Eastern Division before going down 2-11 at Castleford after defeating Hull KR 26-2 at home and 10-7 at Craven Park, winning 10-5 at Featherstone and defeating Halifax 8-6 and Hull (4-3) at home.  Bramley also clinched a place in the first division of the new league structure to be in place for the following season with some magnificent victories including beating Salford (4-3) and Oldham 9-0) at the Barley Mow in successive weeks and Rochdale (18-0) and Batley (8-6) away.  In the final home match of the season, Jim scored the matching winning try in a tense 3-2 against Rochdale Hornets.  To commemorate the feat in securing a place in the first division the bookmaker and sponsor Jim Windsor presented each player with a gold medal to mark their fantastic achievement.

Despite having some good results during the 1964-65 season, Bramley, unfortunately, couldn’t reach the heights of the previous season.  Highlights being victories at Dewsbury (19-4) and Huddersfield in the Rugby League Challenge Cup where Terry Hollindrake score three tries and four goals in the 20-5 victory and taking Leeds close three times, losing at Headingley 14-21 in the league and 9-13 in the Rugby League Challenge Cup wile almost pulling off a major shock before going down 2-6 in the home league match. Jim started in 27 matches and also had a substitute appearance to his name when he came on as a substitute in the 9-25 defeat at Castleford.  The defeat (7-24) at York in April was Jim’s 200th start for the Bramley club.

Jim’s final season for the Bramley in which he had served with great distinction was to be the 1965-66 season.  He scored three tries during the campaign, a try in the 21-12 victory at home to York and then scored in successive matches first in the 26-0 win at Batley and then in the 20-9 home beating of Liverpool City.  His 232nd start and his 236th overall appearance came in the final match of the season which was a thrilling 15 al draw at Whitehaven while his final home match had been two weeks earlier when Bramley defeated Bradford Northern 7-4.  A club record holder and a great stalwart for the Bramley club.