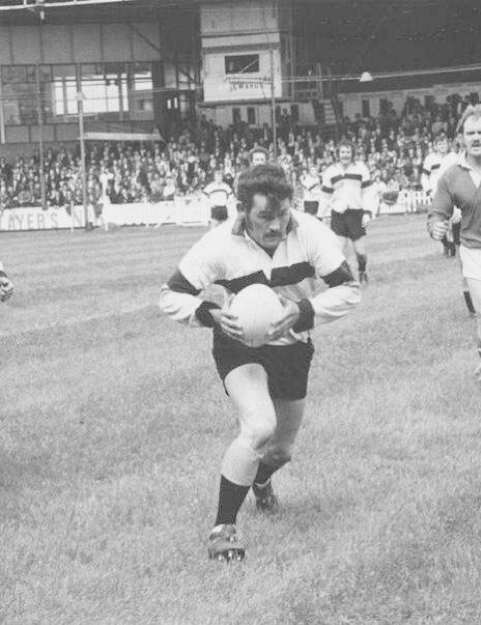 Johnny Wolford made his first appearance for Bramley as a sixteen year-old, at home to Hunslet in a 12-18 defeat on the 29th Sept 1962 in an Eastern Division championship match.  His only other appearance that season was a 4-23 reverse at Featherstone Rovers in March 1963.

Season 63/64 brought 14 appearances for Johnny at either stand-off or scrum-half.  He scored his first try for Bramley in an impressive 23-12 victory at Salford and followed that up with a try a week later in the 19-2 home win against Doncaster.

The highlight for Johnny in the 64/65 season was a try along with a hat-trick of tries and four goals from Terry Hollindrake in a 20-5 Challenge cup tie at Huddersfield. The following season saw Johnny score his first brace of tries in a match in a 26-0 win at Batley while the end of the 66/67 season saw him play the final 12 games of the season at full-back, overall the season saw him make 36 starts for Bramley and for the second season running ended with a total of five tries for the season.

1967/68 saw Johnny swapping from full-back to stand-off throughout the season finishing with 24 starts at full-back, 10 at stand-off and an appearance at centre away at Leeds in the Rugby League Challenge Cup.  He also had the distinction of being the club’s leading try scorer with 10, which included a brace at home against Hunslet plus 2 in the 46-14 home victory at Easter versus Blackpool Bourough, where he also added a goal for good measure!

The first four games of the 68/69 season saw Johnny playing at left centre where he scored the only try in a hard-fought 5-4 home victory against Whitehaven in the opening match of the season.  In a relatively poor season for the Bramley club the highlight being a shock 18-17 win at the Boulevard. Playing in 37 matches during the following season and Johnny was once again the club’s leading try-scorer with 11 as Bramley notched quality victories against Castleford, Dewsbury, Hull KR, Huddersfield, York and an impressive 16 all draw at home to Wakefield.

With over 200 first team appearances under his belt, Johnny started the 70/71 season by scoring 3 tries in the first three games of the season including 2 in the 27-5 demolition of Bradford Northern in the first round home tie of the Yorkshire Cup.  Hunslet at home provided another two tries as he ended the season with 10 tries for the season, 5 behind the club’s leading try-scorer Peter Goodchild.  Bramley reached the semi-final of the Yorkshire Cup before losing 2-23 at Featherstone and reached the quarter-final of the Rugby League Challenge Cup before losing to Leeds at Headingley.  Possibly a turning point in the Bramley club’s history happened on January 30th when a 5-10 defeat at Barrow saw Johnny score a try in his first appearance at loose-forward, a position he would soon shine in and help the Villagers to their most successful spell in the club’s long history.

His new position enabled his ball handling skills shine even brighter as Bramley again reached the quarter-final of the Rugby League Challenge Cup during which they defeated red-hot favourites Bradford Northern before a record McClaren Field crowd of 7,500 as Bramley started to look to the future with great confidence.

Seven tries from 35 appearances, including 2 in the 24-11 victory at Doncaster helped Bramley secure a top sixteen spot and guaranteed First division rugby at McClaren field the following season.

The following season would create history for the club as they won their first-ever trophy by defeating Wakefield away, Castleford and St.Helens at home and cup-kings Widnes on their own pitch to win the BBC 2 Floodlit Trophy. The team also reached the semi-final of the John Player trophy before losing at Rochdale Hornets.  With Bramley now appearing on TV it enabled armchair followers of the code around the country to be amazed and impressed with the quick hands and brain of a certain J.Wolford.

Despite scoring eight tries in 35 appearances even Johnny couldn’t help the club escape relegation to division two after a disappointing 74/75 season, despite defeating Doncaster 52-17 club record victory in the first round of the Yorkshire Cup.

From the incredible highs of only two seasons ago Bramley started the 75/76 season in division two.  Johnny scored tries in four consecutive matches during the early part of the season Bradford (YC) away, Whitehaven and Halifax away and a home defeat against York, but Bramley never looked as though they would bounce straight back up to division one despite all of Johns efforts from the base of the scrum.  With great sadness for the loyal Bramley fans it was no surprise when Johnny was transferred to first divison Bradford Northern.  His final game in the famous amber and black was a 14-14 draw at York following a 2-14 defeat to Leigh the week earlier in what would prove to be his last home appearance.  Johnny left Bramley as the clubs career record try-scorer with a total of 79, Jack Austin overtook him the following season. However sad, Bramley fans were pleased when Johnny won the first division title with Bradford to earn the honours and plaudits his skills and astute rugby brain deserved.  For many, Johnny Wolford was Bramley’s greatest ever player and he surely deserved more than his two caps for Yorkshire and a Great Britain under 24 cap.