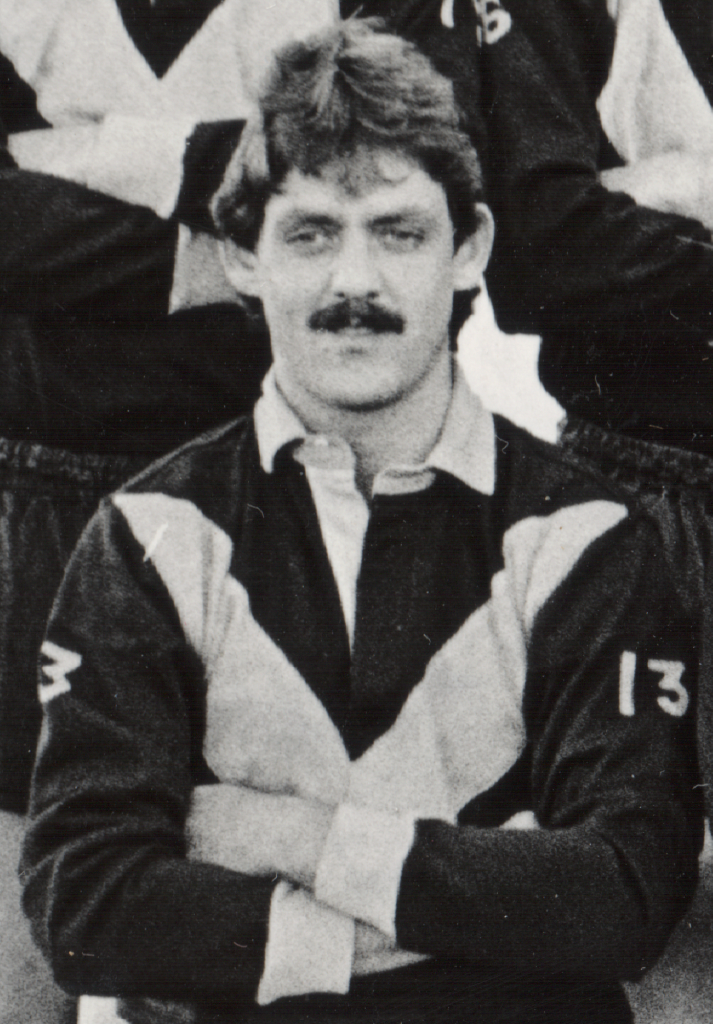 Having signed from Leeds to obtain regular first team rugby, Peter made his debut at right centre in a 9-28 defeat at Hunslet on the 20th September 1981.  The following week saw him play his first match at McClaren Field and celebrated with his first try for the club in a 15-10 victory against Dewsbury.  Peter finished the season with seven tries, including his first brace in the 16-11 home victory against the Cardiff Blue Dragons.  Due to Bramley having a very settled and mainly injury free first team during the following season peter was restricted to just 8 starting appearances and 8 substitute appearances, however he still crossed for six tries including two in the 21-6 home win against Doncaster.

The 1983/84 season was a troubled season for Bramley as a one point they looked like going out of existence, the one bright spot for Bramley supporters was seeing Peter playing on a regular basis in the first team.  In his 20 appearances he crossed the whitewash on 13 occasions including a spectacular try against red-hot favourites Wigan in a 10-10 draw at McClaren Field in the first round of the RL Challenge cup, he also scored Bramley’s only try in the replay when the villagers lost 3-34.  In the early part of the season he had scored tries in five consecutive matches including two tries at Carlisle (22-6) and two at home in a 32-0 drubbing against Doncaster and near the end of the season he crossed for another two tries in the 22-28 defeat at York.

By now he was becoming a massive hero among the Bramley followers with his unpredictability and sublime skills often doing something outrageous to seal a Bramley victory.  In 33 appearances, including 2 at full-back Peter ran in fifteen tries during the 1984/85 season, also adding a goal (in a 32-4 home thrashing of Whitehaven) and three drop-goals for good measure!

The season of 1985/86 will always be remembered as “The Peter Lister season” as Peter was at his dazzling best throughout the season and smashed the clubs tries in a season record.  A try after coming on as substitute in the 14-13 home victory against Batley in the first game of the season was the start of a lightening start to the new season as Peter crossed for 13 tries in the opening 12 fixtures including braces of tries against Doncaster (league and Yorkshire Cup), Fulham and Runcorn.  His second try at Runcorn secured a very late 31-29 victory and could only have been scored by “Twister” Lister.  After going through a “lean” spell Peter hit the try line in three successive games including two in one of Bramley’s greatest ever victories when they defeated highflying top of the table Whitehaven 38-14 at the Recreation ground.  The performance of the Bramley team and especially Lister and Mason is still talked about by Bramley fans who had made the long trip that day.  The 22-14 defeat at home to Barrow was quickly forgotten as Peter crossed for his 20th and the new record breaking 21st try of the season, and to celebrate he scored another two in the 46-10 home drubbing of Keighley the following week.  With the record now secured Peter then went up another gear and crossed the whitewash nine times in four matches (all at McClaren Field) including a hat-trick at home to Runcorn (36-22) and two in each of the matches against Doncaster (14-10) Mansfield Marksmen (46-20) and Workington (32-22). After scoring in the first match of the season Peter completed his try scoring feats for the season with a try in the last match of the season, a 14-8 win at home to Whitehaven.  An incredible season ended with Peter topping the try-scoring list with 34, amazingly 18 tries ahead of club recording signing (at that time) Andy Mason.

The following season was always going to be an anti-climax after the unbelievable events of the previous season, however Peter still finished top of the charts but this time with only 11, in what was a disappointing season for the Bramley club.  Highlights for Peter that season were a double of tries against Swinton away (12-54), Sheffield at home (20-14) and at Fulham (20-24).  1987-88 started in great style as Peter scored six tries in the first four matches of the season including a stunning hat-trick whilst playing loose-forward against Doncaster in a 39-12 victory in the first round of the Yorkshire Cup, a performance which earned him a standing ovation as he was substituted in the final minutes of the match.  A productive season saw him finish with 17 tries as he crossed twice against Dewsbury (14-19) York (18-27) at home and Batley (20-13) away.  His eighth try of the season scored in the 18-26 home defeat to Fulham brought his career total to 93 and so became Bramley’s record try scorer of all time beating Jack Austin’s career record of 92, while his dive over the whitewash in the 16-36 home defeat to Oldham provided Peter with his 100th Bramley try and still remains the only player in Bramley’s 140 year history to score a hundred plus tries for the club.

For the fourth consecutive season Peter scored a try in the first match of the season, this time in a 10-13 defeat at Sheffield Eagles, he then scored a classic Peter Lister hat-trick in the 32-0 away victory against Mansfield Marksmen, while another hat-trick was scored later in the season as Bramley defeated Batley at home 22-8.  He finished with 28 tries in the season just in front of Peter Lewis who crossed for 25.  1989/90 brought just eight tries, but  he still finished the club’s top try-scorer for the season with the pinnacle of the season being when he scored for a very understrength Bramley side as they won at top of the table Rochdale Hornets 25-18.  Peter’s final season was to be the 1990/91 campaign when he started just 11 matches and came on as sub 3 times including his final appearance when he replaced former GB international Henderson Gill in the 10-17 home defeat against Swinton,   His 140th and final try in the amber and black came in an 18-30 defeat at Hunslet. Peter did play one match under the coaching of Ray Ashton after coming out of retirement approximately three years after his last match, he still showed glimpses of his unique style of play, but sadly wasn’t selected again and so retired for good this time.  Legend is one of the most over-rated words used in recent years but Peter Lister can be called a legend and no-one who saw his magical skills whilst at Bramley would disagree.