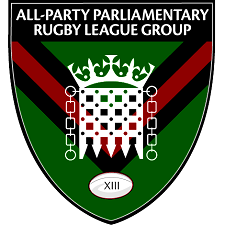 On Monday 20th January, The Parliamentary Rugby League Group will be hosting their annual dinner, and we will be there as guests of honour, and as the primary sponsor of the body’s annual charity dinner.
The dinner, taking place in the House of Lords on 20th January, will raise money for Rugby League Cares and present awards to worthy recipients in the game, as selected by Parliamentarians.

Bramley Buffaloes play in the Yorkshire Men’s League Competition, having twice been crowned Champions and five-times minor premiers of the National League structure. The Buffaloes formed from the ashes of Bramley RLFC, who resigned from the professional game in 1999, and this year celebrate the 140th Anniversary of their first game in 1879. The Bramley club has a strong in the history of the game, being one of the pioneers of the new code of rugby, and in 1893 asking for broken time payments from the RFU. The club hosted the first-ever international game at the Barley Mow between Bramley and the New Zealand All Golds, featuring the great Dally Messenger. Other achievements including loaning players to the French in the 1930s, winning the floodlit trophy – in daylight – in December 1973 against Widnes, and becoming the first fans-owned club in the UK in 2000.

On supporting the dinner, director Martyn Cheney said “Bramley Buffaloes are proud to be associate members of the Parliamentary Rugby League Group and are honoured to be sponsoring this event in our 140th Year. I have long been a supporter of the Group. It’s a fantastic body, with passionate MPs and Lords who want nothing but the best for the game. I share that passion and having been to several the dinners and seen the money they raise for Rugby League Cares, I thought I would like to offer my support this way to ensure another great evening. I am looking forward to it.”

On making the announcement, Chair and MP for Bradford South Judith Cummins said “the Group welcomes Bramley Buffaloes as the major sponsors of the Group’s annual charity dinner, particularly in such an historic year for them. The dinners allow us to celebrate the past year in the sport, and award those we feel are outstanding in our game. Martyn and the Buffaloes have been a longstanding supporter of the Group, and we are grateful to him and the club for their time and effort, and now support.”