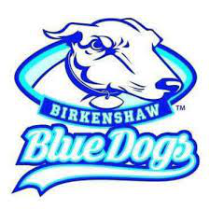 On an afternoon where the sun constantly shone throughout, the Buffaloes ‘A’ Team took on a previously undefeated Birkenshaw side in a game that certainly lived up to the well-known phrase a game of two halves.
With a bigger but older pack, Birkenshaw started brightly with their first try coming as the acting half-back dove over from the final play the ball of the set for a converted try in the 5th minute. Score Buffaloes 0 – 6.

Birkenshaw used their big forwards to good effect, and despite some good defence by the Buffaloes, they struggled to stop Birkenshaw, who went in for two further converted tries in the 20th and 30th minutes. Score Buffaloes 0 – 18

Although the Buffaloes had their chances throughout the first half, the final pass just didn’t stick near the line until just on the stroke of halftime. The tireless Keiran McFarlane scooted through the despairing Birkenshaw tacklers from 10 metres out to go in at the side of the posts to open the scoring for the Buffaloes in the 40th minute; Tom Jenkins stepped up to convert. Score Buffaloes 6 – 18 at Half Time

Despite the positive attitude of the Buffaloes players when the second half started, Birkenshaw, in the 50th minute, moved the ball to their left and found a gap to score their fourth converted try to lead again to 18 points. Score Buffaloes 6 – 24.

This spurred on the Buffaloes as the match entered into a particularly feisty spell, with Andy Boot refusing to take a backward step when faced with his opposite number. Both men received 10 minutes in the bin after punches were thrown. The Buffaloes, however, used the extra space to their advantage when on 53 minutes, Lewis Johnson broke through to score an unconverted try. Score Buffaloes 10 -24

The Buffaloes continued to press, and Charlie Raistrick showed excellent strength and determination to go in for the Buffaloes 3rd try of the afternoon in the 60 minutes. The try was converted. Score Buffaloes 16 – 24.

The Birkenshaw side, to a man, looked tired and although still leading, several of their players went down injured, seemingly trying to run down the clock in a second half that stretched into 55 mins with continued injuries and stoppage time.

On 65 minutes, Keiran McFarlane went in for his second try of the match showing his strength and determination to ground the ball despite being surrounded by would-be tacklers. There was no conversion; Score Buffaloes 20 – 24.

Birkenshaw took an age to kick-off, and the Buffaloes worked the ball upfield to look for the winning score against their tiring opponents. This came in the 79 minute. When after several drives from the Buffaloes packmen, the ball found its way into the hands of Aiden Miller 15 metres out. Aiden showed speed and strength to burst his way through the despairing Birkenshaw cover and ground the ball to the delight of his teammates and the travelling fans.

With the score at 24 all and the match in the final minute, The Buffaloes needed a successful conversion to win the game. Up stepped Tom Jenkins to take his time and coolly slot over the conversion. Final score Buffaloes 26 – 24.

Needless to say, the Buffaloes players were jubilant and left the field with cheers in their ears after a never say die performance against a strong Birkenshaw side.