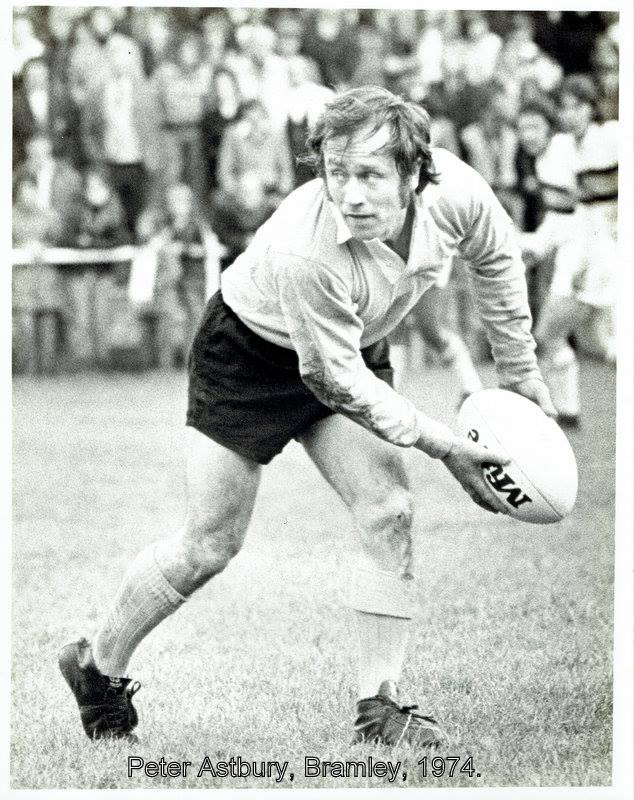 It is with great sadness that we have to report the passing of former Bramley favourite Peter Astbury.

Razzer signed from Leeds and made his debut on Jan 9th 1971 in a 5-13 defeat at Batley. He scored his first try in the amber and black in the 16-4 victory at Rochdale Hornets in April 1971. He played in the first twenty matches of the 1971-72 season including one as hooker in the 3-53 defeat at Wigan. Peter scored four tries in his 36 matches during the season in home victories against Halifax (Yorkshire Cup)18-12 and Pilkington Recs (RL Cup) 19-5 the 15-12 away win at Huyton and the 7-16 home defeat to Featherstone Rovers.

The signing of goal-kicking scrum-half Barnie Ward from Wakefield Trinity resulted in Peter only making 14 appearances plus one as substitute hooker during the 1972-73 season. When he scored tries in the 11-24 defeat at Dewsbury, the 26-5 home John Player home victory versus Pilkington Recs and then scored a try and goal in the narrow 18-20 home defeat against Hull.

The 1973-74 campaign saw Peter start 19 matches and came on as a sub in another three. He scored a try in the sensational 30-17 victory at Oldham and another in the 21-12 home win versus Whitehaven. The 41-20 home win against Leigh saw Peter cross for his only hat-trick of tries for Bramley and four days later scored the only try in the 3-11 loss at Dewsbury. The 1974-75 season was a landmark season for “Razzer” as he made his 100th appearance for Bramley in the 5-30 home defeat to St. Helens in the RL Cup and started his 100th match in the 16-6 home win versus Rochdale Hornets.

The season brought him tries in the home matches against New Hunslet (27-9), Huyton (25-5) and finally in the 22-13 victory against Halifax before he was transferred to Bradford Northern.

His Bramley career consisted of 124 starts and six substitute appearances with him scoring 22 tries and one goal. He came back to coach Bramley with Tony Fisher and just missed out on promotion to the first division. He also coached Keighley and Doncaster with Tony and finally at York with Roger Millward.

He had had dementia for the last few years and will be fondly remembered by all Bramley fans who saw him wear the Bramley shirt with pride and always gave 100% combined with fantastic enthusiasm.

Our condolences go to his family and friends.