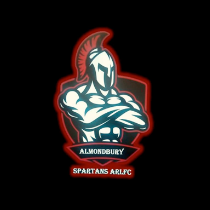 The Buffaloes were defeated after a defiant first half at Almondbury Spartans.

The Buffaloes travelled for their first ever visit to Almondbury Spartans, and on arrival, comments were made about how the severely sloping pitch would favour the home side. These comments proved to be absolutely accurate in the final reckoning.

The Buffaloes played downhill in the first half. Still, Almondbury had the far greater share of the ball due to the Buffaloes either losing the ball or to their regular infringements resulting in penalties against them. That said, the Buffaloes defended their line well, defusing several last-tackle-bombs. The pressure, however, began to tell from the 25th minute onwards when young full-back Kasper Mroz had to leave the field permanently due to what appeared to be a painful knee injury.

Although the Buffaloes regrouped, Almondbury went in for their first try in the 25th min. Score: Buffaloes 0 – 6.
The Buffaloes tried hard to work their way downfield, but with very little ball, these attacks proved to be very infrequent. There was one very promising attack of note in the first half, but unfortunately, the Buffaloes wingman was forced into touch by the Almondbury cover tacklers.
Just before the end of the first half, an Almondbury player ran the ball in, and multiple buffalo players supported one another in the tackle.

Unfortunately, Lochlan McGill took a knee to the head during this tackle and suffered a concussion striking him out of play until a full medical assessment was complete. Cameron McGill was also awarded a yellow card after the brief altercation. This left the Buffaloes with 11 men, yet there were to be no further points in this half.
Half-Time score: Buffaloes 0 – 6.

The second half was completely dominated by Almondbury, who knew exactly how to take advantage of the slope. Their first try came in the 41st minute when their winger was put through and romped away to score. This was repeated in the 45th, 50th and 55th mins for 4 converted tries. Score: 30 – 0.

As the second half played out, the Buffalo sideline looked like a scene from A&E. Kasper and Lochlan were already finished for the match. They were joined by Bailey Harman, who picked up a knee injury, Brad, who went over on his ankle, and Tony Morrison, who suffered an injury as he kicked through on the last tackle and fell awkwardly.

Despite playing with severely reduced numbers, the Buffaloes stayed strong and prevented any further tries throughout the last 25 minutes of the game, yet they had little opportunity to attack.

With 5 minutes left on the clock and the Buffaloes down to just 9 men, coach, Cam Leeming, asked the referee if he would blow for time in the 85th min. Still, the referee declined, saying we legally had enough players to continue, and he would only stop the game if the Buffaloes were down to 8!

The remaining nine showed steely determination and could have easily scored a consolation try if not held just short of the line on multiple occasions.

Overall, the Buffaloes suffered following their efforts in the first half, which left them with little energy in the tank playing up the slope. Almondbury used their superior player numbers and local knowledge of the pitch to their advantage. An Almondbury Facebook message after the game summed up the afternoon, ”Great game, the boys toughed it out against an aggressive Bramley side.”

Let’s wish all our injured players a speedy recovery and hope they have enough time to lick their wounds and regroup with no games over the next two weekends. Special mention to the Buffaloes player of the match Louis Morrison who had been in his sick bed all week but still ran in hard throughout the match, turning his blood to water.

Tries None
Goals None