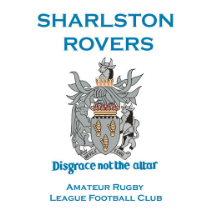 had defeated the Buffaloes earlier in the season on their short and narrow home ground.

The opening exchanges were even, with both sides looking to out-manoeuvre the other without either

side gaining the advantage. In the opening exchanges, a Sharlston player was injured in the tackle, and it

soon became apparent the physios were concerned about a suspected neck injury. The play was suspended

for 20 mins whilst the injured player was seen to and eventually taken off the field of play on a stretcher.

Once the game restarted, the Buffaloes maintained discipline throughout the match despite the Sharlston

game plan, which appeared to be to intimidate the Buffaloes players in the tackle. The Buffaloes composure carried them forward as they left the referee to get on with his job, and he did that well, penalising Sharlston several times for ball stealing and high tackles.

The first points came in the 18th minute when the Buffaloes showed some lovely approach play. Louie

Morrison burst through, and the ball found Connor McGill, whose lovely pass close to the line found the supporting fullback Jamie Donnelly who swooped in to score. Connor narrowly missed the conversion. Score: Buffaloes 4 – 0.

There were no further points in the first half. Sharlston’s heavy-weight pack started to look tired and a little

out of place on the much larger Buffaloes pitch, and they couldn’t make any headway, although ex-professional (Hemel and Oxford) Jorge Jenkinson tried hard to motivate his team. Half Time score: Buffaloes 4 – 0

The Buffaloes started the second half brightly and posted their second try in the 50th min. The action

started with the Buffaloes’ strong defensive work, which restricted Sharlston to their half. A last tackle

kick was launched upfield and found Sam Marshall at fullback on his own 20-metre line. As Sam looked

up, the cry of ‘’find the gap’’ was heard from the Buffaloes bench, and Sam didn’t need to be told twice.

He set off on an amazing run. First, he ran 30 metres to the right-wing, beating 3 Sharlston players on the

way before straightening up and racing down the right-wing. With the fullback in his way, Sam was

tackled but managed to pass the ball to Kieran Hudson just 10 metres out. Despite three Sharlston cover

tacklers, Kieran wasn’t going to be stopped. He showed his sheer strength as he forced his way over the

line and dove to the ground to the rapturous applause of the home fans. From wide out, Connor McGill

In the 60th minute, the Buffaloes were camped on the Sharlston line when Lochlan McGill, who was a thorn

in Sharlston’s side all afternoon, forced his way through from short range after strong work by the Buffaloes pack. Connor McGill converted. Score: Buffaloes 16 – 0.

The Buffaloes fourth try of the afternoon came in the 70th minute. The Buffaloes’ forwards, now dominating the Sharlston pack, once more moved up the field. As the last tackle came, it looked like Sharlston may have held out, but then the ball found Jacob Oldroyd ten metres out. He went across the posts before squaring up and beating several despairing Sharlston ‘would be tacklers’ to get over the line. Connor McGill popped over his third conversion. Score: Buffaloes 22 – 0.

In the 75th minute, Sharlston managed to get their only points of the afternoon with a breakaway try. The Sharlston player slipped the ball out of the tackle to score a converted try. Score: Buffaloes 22 – 6.

The final score of the afternoon came after the Buffaloes were once more camped in the Sharlston 20 metres zone. Sharlston were guilty of several penalties in succession. When longstanding fan Andrew

Johnson asked why a team warning wasn’t being awarded; the referee jokingly replied there was more

likely to be a crowd warning putting Andy firmly in his place!

The final act was when the referee blew for

a further penalty. Man of the match Louis Morrison stepped up to slot the ball between the uprights to

Overall, it was an excellent disciplined team display, and it was this composure that ultimately led to the

Buffaloes win. It was difficult to pick a man of the match with all the forwards showing their power in attack and defence. They were supported by the Buffaloes backs, who showed excellent strength and skills to defeat a Sharlston side who had only lost once all season.