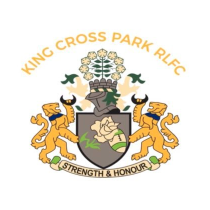 For the second time in two weeks, the Buffaloes faced the top of the league, King Cross Park, this time at their home ground in Halifax.

The Buffaloes welcomed Sam Neave, Michael Wright and Lewis Bromley back into the team following their Ilkley sevens appearance with their home club, Aidan Baranyi, returning after suspension, and Elliot Carter and Lewis Johnson on Debut.

The first half an hour of the game was fast, free-flowing rugby league, with no quarter given by either side, probing and searching for a break that would allow them to post points on the board.

The first attempt for points was by the home team in the third minute when they put a deft kick through the buffaloes line, but the ball skipped over the short in-goal area and went dead.

Buffaloes Man of the Match, Lewis Bromley, was a thorn in the King Cros Park side all game and was capable of breaking the line at will; and made promising runs in the 16th and 19th minutes, been brought to ground on both occasions before he was able to offload the ball.

In the 27th minute, Cameron McLachlan went on a rampaging run but was taken to the floor by a last-gasp tackle from the home side full-back.

In the 33rd minute, The home side broke the deadlock when they brought the ball towards the Buffaloes left-hand side before being tackled short. On the next play, they spun the ball quickly through the hands onto the right-hand side of the buffaloes defence, who was caught wanting; with the swift play and King Cross Park was over for the first score of the game, the conversion was successful, giving them the lead 6-0.

Five minutes later, and with the ball in hand, Captain Lochlan McGill was aggrieved by a perceived offence on Brother Connor and went in swinging. This led to an all-in brawl. Once the Referee had separated the teams and calmed things down, he sent the King Cross Park centre, Josh Brown, to the sin-bin and Sent Lochlan off for retaliating.

The Buffaloes were on the back foot from this point onwards in the game, and from the resulting penalty, the home team scored under the black dot for a converted try, doubling the lead to 12-0. as the ball went over for the conversion the Referee blew the half time whistle.

Coach Steve Langton rallied his troops at halftime, and they came out of the blocks the fastest in the second half.

In the 42nd minute, Lewis Johnson, on the back of a quick play, the ball streaked in at the corner for an unconverted try, narrowing the lead to 12-4.

Four minutes later, the Buffaloes were back in the game for sure when the Buffaloes burst through the defenders from the kickoff, and Michael Wright capitalised for a try, with Connor McGill adding the conversion, making the score 12-10.

The Buffaloes we on the lookout for the next break, but so were the home side, who, with an extra man, took advantage of that as the Buffaloes tired, despite scrambling well in defence.

Kings Cross Park added tries on the 51st, 60th, and 63rd minutes with two of them being converted, making the lead 28-10.

In the 71st minute prop, Cameron McLachlan was lucky to be not sent off after clotheslines one of the King Cross players to stop him from scoring a try but was sin-binned instead. From the penalty, King Cross Park was over again for a converted try, making the score 34-10.

With the game’s final play, Buffaloes Scrum half, Martin Loveridge, broke free from the defenders and raced 60 metres for a consolation try, adding the conversion as well, making the final score 36-16.