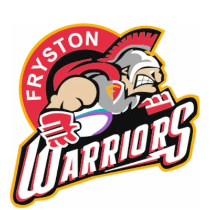 The Buffaloes took to the field in the glorious sunshine against their opponents from the Premiership as they looked to progress in the YML Cup competition.
The opening exchanges were even, with both sides looking to out-manoeuvre the other without either side gaining the advantage. Fryston had two players carried off with leg injuries who could not continue, which made their afternoon challenging. They did get the first points on the board in the 20th minute with a well-worked try down their left-hand side. The ball passed through several pairs of hands, and the Fryston centre evaded the Buffaloe’s cover tacklers to go in for an unconverted try. Score: Buffaloes 0 – 4.

Watching the first points go to the opponents fired the Buffaloes up and pressed on forward. After being held up over the line twice, Connor McGill went in for an excellent try in the 35th minute after a great bout of inter-passing close to the line. The conversion attempt just went wide. Score: Buffaloes 4 – 4.

Half time honours even with a score of Buffaloes 4 – 4 Fryston.

The Buffaloes started the second half brightly, and the tries began to flow. Before the first try of the half, the Buffaloes were denied a try on the left wing. As the referee adjudged, the ball had not been grounded. The Buffaloes did not dwell on that decision, sweeping the ball across the field to Jamie Donnelly (who had an excellent game both in attack and defence), who met the ball at pace to score a superb try on the right-wing. Connor McGill’s conversion attempt went just wide. Score: Buffaloes 8 – 4.

At 55 minutes, the Buffaloes went in for their 3rd try of the afternoon when Kacper Mroz strongly finished an excellent break by Kieran Hudson. Kacper left the Fryston full-back for dead with an outrageous dummy to score out on the right. Connor McGill’s conversion again just missed. Score: Buffaloes 12 – 4.

In the 60th minute, Connor McGill went in for his second try of the afternoon, finishing a quick move close to the line by diving through the Fryston tacklers. Connor’s conversion went over. Score: Buffaloes 18 – 4.

The Buffaloes fourth try of the afternoon, on 65 minutes, was a solo effort from Curtis Sidebottom that completely drained Fryston’s resolve. After a trademark barging run left several Fryston players in his wake, Curtis put in a short grubber kick which ricocheted off a Fryston player and bounced back into Curtis’ hands. He romped over the line for a well-deserved try. Connor McGill converted. Score: Buffaloes 24 – 4.

In the 75th minute, Kieran Hudson scored a great try after being a thorn in Fryston’s side all afternoon. He took the ball from 25 metres out and simply refused to be held, despite several attempts from Fryston to tackle him. Connor McGill’s conversion attempt went wide. Score: Buffaloes 28 – 4.

The Buffaloes final try came in the 78th minute with Michael Emmet’s impressive first try of the season. He ran through the tired Fryston pack to score under the posts. Tony Morrison converted. Score: Buffaloes 34 – 4.

Overall, it was an excellent team display, and it was difficult to pick a man of the match. All the forwards were powerful, running hard in attack and tackling well. They were well supported by the backs, who showed excellent strength and skills in defeating a team from the premier division, which had only lost 1 out of 5 games so far.